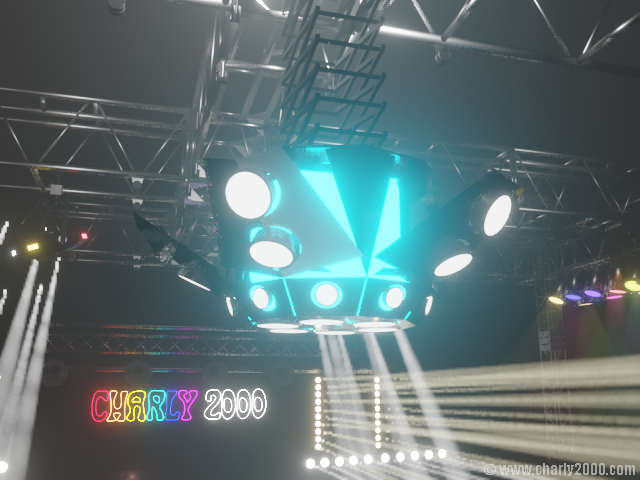 Here are some pictures of my 3D-Disco rebuilding-project. Its work is still in progress, more details and improvements will follow. All objects and effects were modeled in Blender. The real discotheque was used for mobile entertainment and consisted of a big part of connected traverses, which could be raised up by four motors, one on each corner. Under every motor, a black catch-bag for the chains was attatched. This made sense, and was done to prevent the outcoming chains from touching ground. All motors had to run precisely synchronized, to keep the main truss in horizontal position. The „cages“ which contained professional lightning effects, were special constructions, holding whatever was installed inside in its center, saving room and space during transport. When unlocked and raised, the inner devices sank out of the bottom, getting in ready-position for operation. Fantastic visuals came from the „lightning-rows“. They were made up by a line of ten spotlight radiators each, their angles could be controlled individually by the VJ on the console next to Charly 2000 himself. Since Charly wanted to present additional spotlights which could be moved one-by-one separately, he installed a pair of „eight-star“-VFX devices in extra at the front of the traverse-truss. Another one of the very main attractions at Charly 2000 mobile discotheque was the unique „special-roundabout-carousel“ projector. Heavy-weighted and more than two meters in diameter, it could be remote lowered and raised independently from the upper truss it was attatched to. Its outer hull looked like a space-satellite – with bright glittering metal. Five plates on the corners were capable of being deployed. Colored inner lightning was optional switchable. The outer radiators, on top of each other, counted ten in numbers (they were the biggest ones). Smaller lightning emitters (also ten in numbers) had been arranged circular directly one level down and, finally on the bottom, six bigger emitters could be found beside a flowerlike cut-out of small holes at the center. The whole unit and its functions was controllable via remote by the VJ.